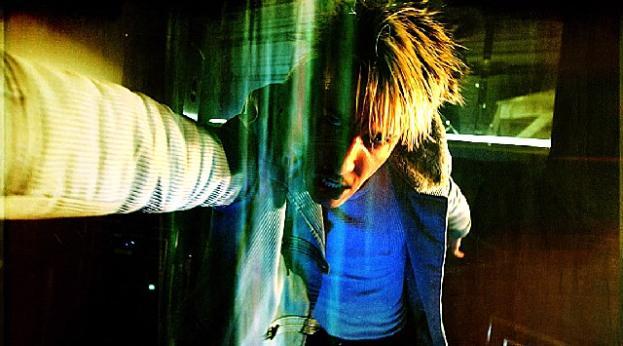 Debbie Harry once said rock ‘n’ roll is 50 percent music and 50 percent visual. Peter Pepper seems to have taken this aesthetic passage to heart. Pepper is a self proclaimed “adventure punk” who is on a mission to musically motivate and take the initiative to proliferate his personal purpose.

Growing up, Pepper’s parents played Black Sabbath, Pink Floyd, and Devo. Their strong musical identities were something Pepper related to, but wasn’t truly musically galvanized until his teens when he first heard Nine Inch Nails’ The Downward Spiral.

“It was the first thing that made me realize I wanted to make music,” he said. “It took a little bit for it to sink in. When it did, it clicked and opened my eyes that electronic music that aggressive had content and felt real.”

Inspired by NIN, he began “tinkering with digital recording programs and slicing up .wav files, putting them together rhythmically, experimenting … taking random samples or cutting a drum out of a song, turning it into a pattern. Kind of like Silly Putty with sound.”

Around the same time, Pepper and two of his friends began making music together under the moniker Retard-O-Bot. This union was “just for fun”, without direction, and the members used it as an outlet to be creative, and “give purpose to what we were doing” artistically.

Fun and games quickly changed to a matter of business. They were prompted to get quickly their act together when asked by a mutual friend to play a show.

“The show brought things into focus, and was the bite — the performance bite,” Pepper said. “We stood out due to our all-out no-restraint approach and volume turned up way louder than anyone had ever experienced.”

They then recorded three albums and toured as often as possible, taking any show they could. Pepper was ambitious and “hungry for it,” spending a majority of his time making contacts through email, website scouring, and phone calls. His persistence paid off and Retard-O-Bot shared the stage with Wes Borland, Kill Hannah, Combichrist, and the Genitorturers.

Retard-O-Bot fizzled out and came to an anticlimactic end. In January, Pepper decided it was time for a change.

“The name began to have a derogatory interpretation,” he said. “I don’t care about pissing people off; I do care about pissing off a select group of people for no reason. That was motivation to re-assess; it made sense to take this opportunity as a new launch point.”

Pepper is currently writing, recording, and producing material for a new album, titled Peter Pepper vs. The Great Whatever. He is collaborating with Frank Gryner of Rob Zombie, A Perfect Circle, and Crystal Method fame, who is performing the guitar parts and overseeing the mixing.

When working on audio, Pepper thinks visually. This is apparent in the video for his new song Think They Know, a high-speed circus ride that was filmed in an abandoned factory and on Bob Ringling’s personal train. It’s viciously verdant with visual and sonic undercurrents reminiscent of NIN, Tool, and a sprinkling of Eminem.

For a further glimpse into the world of Peter Pepper, look for him Monday, opening for Foxy Shazam at 6:30 p.m. at Orpheum, 1902 Republica de Cuba Ave., Ybor City. Tickets are $10.50. Click here for details.